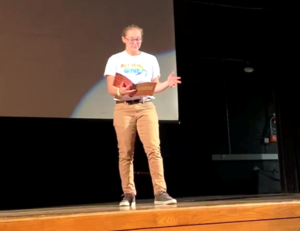 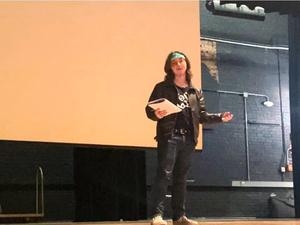 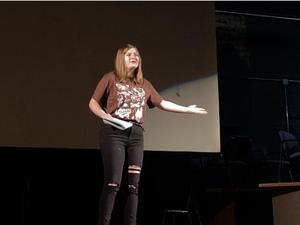 After learning different poetry styles, Creative Writing students tried writing poetry of their own, then performed their selections before a live audience.

Then they tried writing their own poetry.  Sonnets proved to be challenging, and Halloween Haikus were definitely good for a laugh.  But many agreed the best part of all was when the unit culminated in a Poetry Slam held on November 17 and 18. That's when the young writers shared spoken word poetry in the school auditorium before their classmates.

“It was a great way to end our unit with some live performances of poems that explored themes such as identity, love, loss, and anticipation for what the future holds," said their teacher Sheila Ogden. According to Ogden, a total of 14 students performed their poems in the auditorium to experience what it's like to perform while standing on a stage. Other students recorded poems they wrote outside the classroom.

“Either way, these poems were deeply rooted in feeling and written to be performed. “It was incredibly brave of these students to write a piece that explores topics like the ones they chose, and it was even more impressive when they took the stage in the auditorium to share what they wrote with their peers.”